These two Japanese western style buildings are worth visiting when you are in Tenjin. Built in the early 20th century, they are now designated as National Important Cultural Properties. They are only a 5-minute walk apart from one another, and this pair of important historical landmarks are definitely worth visiting.

A Guest House in the French Renaissance Style The first building is the Former Fukuoka Prefecture Public Hall Distinguished Guest House located inside Tenjin Central Park. Upon walking to the east end of the park, you will find a beautiful gray and mint green western-style building. The building is located in the east end of Tenjin Central Park. The Guest House was built in the French Renaissance style in the early 20th century, and it is one of the very few wooden public buildings that remain in Japan. It used to be one of the buildings that made up the former Fukuoka Prefecture Public Hall. When the 13th Kyushu-Okinawa Eight Prefecture Exhibition was held in 1910, the Public Hall was built on the east side of the venue to entertain guests during the event, and now only the Guest House remains at its current location.

Used as the venue for the bustling Kyushu-Okinawa Exhibition The building is designated to be preserved as a National Important Cultural Property.

The Kyushu-Okinawa Eight-Prefecture Joint Exhibition was a showcase for the region’s industries and lasted for 60 days. Throughout the event, industrial, commercial and academic presentations and exhibitions were held almost every day.

The Guest House was used to entertain overnight visitors during the Exhibition. Notable guests included Prince Kan’in Kotohito and his wife, who stayed there in April of 1910.

The two-story wooden building has a faux-stonework design The building’s design features stone pillars and an octagonal spire

The building prominently displays stone pillars at its main entrance as well as an elegant octagonal spire. White decorative tiles cover the outside wall up to the first floor windows, and the mortar walls above them have inscribed masonry joints. One remarkable aspect of this building’s construction is how the window frames and eave moldings on the second floor are made from mortar but designed to appear as if they were made from stone. The foyer has a symmetrical double staircase.

Let’s go inside! The moment you enter the building, you may gasp in surprise. A stately cypress staircase and a large foyer will welcome guests coming through the front door. The 1st floor has two dining rooms, a meeting room, a parlor, and bathrooms, and articles and materials related to construction of the building are on display. 4 square plates can be seen on the floor where a billiards table was once installed.

When you go up stairs, look for the acanthus leaf detailing on the railing. The detail and effort put into the woodwork is evident in the craftsmanship of the sinuous handrails, each carved from a single piece of wood. 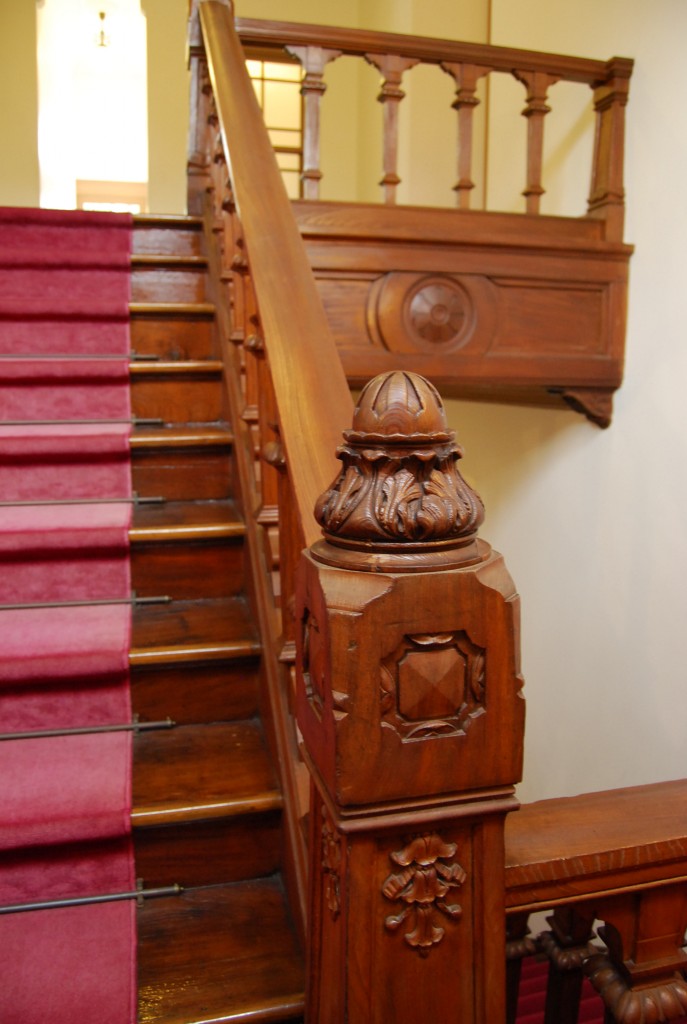 Acanthus leaf detailing on the railing

The second floor has a receiving room, bedrooms, a powder room, and a meeting room. The floors are made from wooden boards and the walls are white plaster with wainscoting. The ceilings are finished in geometric patterns using wood or plaster over wooden frames, with a different design used in each room. The stately receiving room. The curtains and furnishings are recreations of the building’s original items. The different ceiling designs that can be found in each room are a sight to behold.

Marble fireplaces can be found in the receiving room and in other rooms. The fireplaces use gas, which was a new technology at the time. The 2nd floor hallway is a picturesque view in itself. Keep an eye out for the detailed reliefs, edgework, and hinge decorations throughout the building.

Between the first and second floors, there are so many rooms to take in, you may lose track of time! You can imagine the elegant receptions that were once held here.

Take a break at the café! After World War II, the prefectural public hall was used as a courthouse, a high school, and as the prefectural government seat, but now it is part of Tenjin Central Park. With the other parts of the public hall, the Guest House is the only building remaining from the original construction.

A café on the first floor makes for a relaxing space where the past and present come together in an enchanting atmosphere. After exploring the Guest House, you can enjoy another unique experience at its café. The second building on our tour is the Fukuoka City Red Brick Culture Center.

One year before the Guest House was built, the Culture Center was built in 1909 as the Kyushu branch of the Nippon Life Insurance Company. The architects of the building were the master engineers Kingo Tatsuno, who had also designed Tokyo Station, and his colleague Yasushi Kataoka. Tokyo Station has been designated a National Important Cultural Property.

The red brick design gives the building a vibrant look. With its distinct colors and shape, the building’s appearance make passersby look twice. It has numerous turrets and windows running along its roof along with white granite bands ornamenting its red brick walls. Kingo Tatsuno had studied in London and applied the Queen Anne style of building which had become popular in England in the late 19th century. Because of his liberal application of this style in his buildings, in Japan it came to be known as the “Tatsuno style”.

The building now serves as one of Fukuoka’s cultural spaces. The entrancing beauty of the building is apparent in the foyer. Use the provided map to guide your visit through the building.

The foyer is decorated with marble, and a counter in the art nouveau style greets guests as they come in. The first floor is a exhibition room, while the second floor has a meeting room (fee required for usage). The building’s interior has been restored to its original condition, with the marble finish, lighting, curtains, and other elements arranged to the original specifications. Stairs lead up to the 2nd floor. The ceilings, windows, and handrails are all finished with intricate designs. The second floor has three meeting rooms available for public use. These rooms were originally used as a doctor’s office, an examination room, a meeting room, and a receiving room. The largest meeting room. The decorative mantlepiece adds an air of refinement to the space. Currently the building hosts cultural activities such as haiku competitions and small concerts. While access is forbidden, a spiral staircase leading to the roof adds another architectural motif to the space.

This building was designated a National Important Cultural Property in 1969. After being used a historical archive for the city, it was restored to its original condition in 1994 and reopened as the Fukuoka City Red Brick Culture Center.

These western-style buildings are potent reminders of the industrial and cultural revolutions Japan experienced in the early 20th century. These two western-style buildings and Important Cultural Properties, with their masterful architecture, recall the splendor of bygone days. Regardless of your knowledge of Fukuoka’s history and development, they are both definitely worth a visit.

The buildings are also illuminated at night, making these locations must-see for anyone visiting Fukuoka.