Many people only feel that autumn has truly arrived when the leaves on the trees along the street begin to take on a yellow or orange tinge. Why not get out and about to an autumn foliage or koyo viewing spot this year and enjoy nature? Here we present a selection of the top koyo spots around Fukuoka City. Yusentei was established as a second residence of Tsugutaka Kuroda, the sixth lord of the Chikuzen Kuroda Domain, in the mid-Edo period (around the 1700s). It was reborn as a history park for the residents of Fukuoka City in 1981 and called Yusentei Park. The 1-hectare park contains a traditional Japanese garden and a pavilion built in the early Showa period (around 1930). The broad grounds also boast a stand of around 150 maples which turn into a sea of red during the foliage season. A pathway winds around the pond which reflects the beautiful leaves in the middle of the park, offering an astounding 360-degree view. Gently sip matcha tea while gazing at the carp swimming around the pond from the traditional shoin-zukuri style salon for a truly Zen experience. 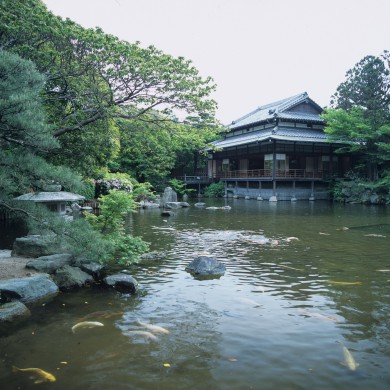 Originally built as a second home for Kuroda Tsugutaka, the 6th lord of Fukuoka in 1754, it was the first Japanese Garden in Fukuoka to be centered on a lake. In March of 1998, the park was designated by Fukuoka of having significant value. The historical park is still appreciated by many people wh… Aburayama Citizens’ Forest is located halfway up Aburayama Hill, around one hour by bus from downtown Fukuoka. It is a nature spot that allows you to immerse yourself in the four seasons and enjoy the ever-changing views. The swing bridge suspended 30 meters above the forest affords a wide view of “Momijidani,” or maple valley, filled with around 670 colorful Japanese maple trees – this is a popular sightseeing spot that combines thrills and autumn leaves. Further up, the central lookout tower at an altitude of 347m brings into view the town beyond the changing forest foliage and in the distance, Hakata Bay. Aburayama Shimin no Mori/Natural Observation Woods is located on the east hillside of Aburayama Mountain. It is a treasury of nature extending to 93.7 hectares with a lot of wild birds and wild flowers. A camp site opens in the summer. There is a nature athletic facility and 3 courses for grass-ski…

Momiji Hachimangu Shrine, surrounded by as many maple trees as its name suggests Momiji Hachimangu Shrine is renowned as a place of prayer for easy childbirth, childraising and protection against evil. Built in the Muromachi period (1336 to 1573), the shrine was moved to its current site of Takatori in 1913, where it offers a panoramic view of Sawara ward. Momijiyama Hill, where it sits, is covered in maple trees, and part of the shrine is Momijiyama Park, a designated recreational area for citizens. For a week or so late in November every year, a selection of trees, including a maple of over 200 years of age, is lit up from sunset until 9pm.  Seven minutes’ walk from Nishitetsu Fujisaki Subway Station. This is a popular spot for maple-viewing, that is in town and easy to get to. Located on the side of the 955m Mt. Rai, which rises on the border of Fukuoka and Saga Prefectures in the Sefuri Ranges, is Itoshima City’s Raizan Sennyoji Daihioin Temple. Its 4.6m high “Wooden Senju Kannon (Kannon of a thousand arms)” statue is a designated national treasure. Just as famous is the 400-year old giant maple, a designated natural monument of Fukuoka Prefecture. As the leaves begin to change color, the shrine is swarmed by camera-toting tourists. The giant maple’s imposing figure is a beautiful sight. Looking up the tree, the entire view is filled with red and yellow leaves. It almost feels like you are inside an enormous kaleidoscope. Another hotspot is Shinji Garden, created in the Muromachi period, colored by a large number of maple trees – and a popular place to enjoy traditional Japanese scenery amid autumn foliage. Lying at the foot of 830m-high Mt. Homan, Dazaifu’s Kamado Shrine is worshipped for love and match-making, exorcising ill fortune that exists in an inauspicious direction, and protection against evil. The mountain is famous for being completely covered in autumn foliage, and particularly for the “Maple tunnel” near the steps on the approach to the shrine where a thicket of maple trees stands. Toward the end of the season, the approach to the shrine is covered in fallen leaves, creating a “Maple carpet”. The shrine area is lit up at night, offering a completely different look from during the day. The upper shrine is on top of Mt. Homan, the lower shrine at the base of the mountain. It is believed that Kamado Shrine originated in the worship of 8 million gods at the top of Mt. Homan, which lies to the inauspicious northeasterly direction from Dazaifu, at the time the regional government was …

In addition to daytime viewing, there are plenty of places set up for night viewing of autumn leaves, offering a fantastical and resplendent sight. By all means go out to see as many places as you can, but we highly recommend visiting the same location twice, once in the daytime and once at night. Have a wonderful autumn!