Let’s go visit that one scene. ～ Super amazing actors! Visiting locations where the movie “Fukuoka” was filmed ～ [Each location in Fukuoka City] 2 middle-aged men & 1 young girl who are dwelling on the past.
What comes to their minds while walking around the city? Je-moon, the owner of a second-hand bookstore in Korea, travelled to Fukuoka being invited by So-dam, a strange young girl who is a regular customer at his bookstore. Actually, a close friend in his college days, Hae-hyo was there in Fukuoka. They had ended up going separate ways after falling in love with the same girl.

This notable movie was filmed in Fukuoka, the town that is attached to director Zhang Lu, who is highly evaluated worldwide and is a popular face of Focus on Asia Fukuoka International Film Festival. The strange stories of the 3 characters are depicted by an amazing cast that is very successful in Korean movies and dramas.

[Attention Points of the movie “Fukuoka”]

No.1: Park So-dam, who starred in the Oscar-winning movie “Parasite” is playing the leading role!

The leading roles are Kwon Hae-hyo, who gained popularity as Deputy director Kim in “Winter Sonata”, and Yoon Je-moon who starred in a lot of famous works such as “Iris”, “Midas” and so on.

Park So-dam who plays a strange young girl, became known all over the world for starring as “Jessica” in the hot Korean movie “Parasite” which won 4 Oscars.

As Park So-dam gains attention from the popularity of “Parasite”, “Fukuoka” is also drawing attention as she also starred in this movie.

No.2: It is screening in film festivals all over the world!

No.3: Filming was made possible with the cooperation of Fukuoka Film Commission and the ties with Focus on Asia International Film Festival!

The director had visited Fukuoka 5 times in total from “Focus on Asia Fukuoka International Film Festival” in 2007 and has been deepening exchange with people in Fukuoka city. The director took his time to stroll on foot around the city during his stay in Fukuoka. Shooting of the film was made possible as his bond with the film festival and Fukuoka Film Commission staffs were strengthened. [Visiting the location sites of the movie “Fukuoka”]

Location sites that we are going to feature for the film “Fukuoka” are mainly in Daimyo area which is popular for young people, and the Hakata area where the Hakata-like atmosphere still remains. Except for the opening scene at the second-hand bookstore, all scenes were filmed in Fukuoka City!

Especially, the back alleys of Daimyo area were highly praised as a location where “wherever you shoot, every shot can be picturesque”.

When director Zhang Lu visited Fukuoka in 2014, he was very delighted as he by chance spotted a signboard of a restaurant called “慶州” (Gyeongju), which is similar to the title of one of his works.

Don’t you also want to visit filming locations to once again experience the scenery seen by the eyes of the director and the cast? Daimyo area was developed as the castle town of “Fukuoka Castle”, which were built by the parent and child, Kuroda Kanbei & Kuroda Nagamasa who created the Fukuoka Domain. In the complicated alley, the town name at the time derived from the occupation still remains as the street name nowadays.

While keeping the remnants of the old days such as alleys that are said to be intentionally bent at right angles to defend the castle during the castle town area, shops and spots that are popular to young people and even foreign visitors like fashions, variety goods, restaurants and cafés, Izakaya and so on are also gathered.

It is an area where old history and new culture are mixed to create a unique atmosphere.

A lot of shootings were also done in Daimyo area. It is a place where you have to take to a walk on if you are to visit Fukuoka. “Irie Books”, where the second-hand bookstore owned by Yuki is set *Image during filming

The second-hand bookstore owned by Yuki.

One step into the store, you will be surrounded by a pleasant tranquility and a mysterious feeling as if time has stopped. The bookshelves facing the road which can be seen from the large windows are also very impressive. The shop where Je-moon bought the sakura mochi. A long-established Japanese sweets shop that has been in business for about 90 years.

The shop where Je-moon bought the sakura mochi. A long-established Japanese sweets shop that has been in business for about 90 years.

The long-established Japanese sweets shop that has been in business for about 90 years, where Je-moon bought the sakura mochi. People line up for the most popular “Mame-daifuku”, and the winter limited “Strawberry Daifuku” is popular as well.

It is said that not even just the cast, even the staffs come to buy their own after the shooting. Answering to the director’s request, the master of “KIDS CLUB” portrayed himself in the movie. A place where time passes by very slowly.

Answering to the director’s request, the master of “KIDS CLUB” portrayed himself in the movie. A place where time passes by very slowly.

“KIDS CLUB”, a scenery that you would want to take pictures without even thinking about it. This is the place where So-dam has her doll kept. Answering to the director’s request, the master portrayed himself in the movie.

The café bar on the 1st floor of an old apartment. It is also open for lunch. This place does not come up in the movie, but being the director’s favorite place, it will be introduced!

The soy sauce store opened in Edo Period. With a beautiful courtyard at the back of the store and a storehouse that is still used as a brewery, it is a historic building.

This place does not come up in the movie, but it is introduced as a favorite place of the director♪ The radio tower in the movie that the main characters search to see “from where in the alley that it can be seen”.

It is portrayed as a symbol of communication in the movie. One scene at the Umakamon Street

The alley where Hae-hyo and Je-moon walked on.
Many restaurants that can be enjoyed at a reasonable price both day and night lining up along the street with a width of about 2 meters. This street is next to the Suikyo Temmangu Shrine and it is said to be the origin of the place name, which is “Tenjin”. The name of Tenjin, the largest commercial district in Kyushu, derives from the name of god enshrined in this shrine. It is the soul of Sugawara Michizane that is enshrined at Suikyo Tenmangu Shrine. At this shrine quietly nestled among the office buildings, the soul of Michizane has long been wo… The V-shaped bridge with the distinctive electrical wires cutting through the space is where director Zhang Lu gives out directions.

This is where the scene of Je-moon and So-dam arriving in Fukuoka was shot. The V-shaped bridge with electrical wires cutting through the space is the director’s favorite.

Close to this bridge, there are Kushida Shrine, Kawabata Shopping Street, Canal City Hakata and so on. If you want to visit filming locations, be sure to visit this spot. This grand tutelary shrine of Hakata is widely known and people warmly refer to it as “Okushida-san.” It is dedicated to the gods of Ohatanushi-no-mikoto, Amaterasu-omikami and Susanowo-no-mikoto. According to tradition, in 757, when Emperor Koken was in the reign and Tairano Kiyomori designated … This commercial complex is built around an artificial canal and consists of hotels, theater, movie theater, shops, restaurants, specialty stores and showrooms. Besides the fountain show and other events held every day, you will never have a chance of getting bored with shopping, gourmet and various… The place where So-dam and Yuki met again. This long-established udon store appeared in the drama “Kodoku No Gurume”, where Hakata udon was introduced.

If you get hungry while visiting filming locations, be sure to enjoy the taste of Hakata udon.

The street where Miyake Udon is located (Old Higashimachi-suji) is also the main course of the festival in which Fukuoka/Hakata take its pride in, Hakata Gion Yamakasa, which will be held in July. As there are a lot of historic temples along the road, this is the area where you can taste the old Hakata atmosphere. 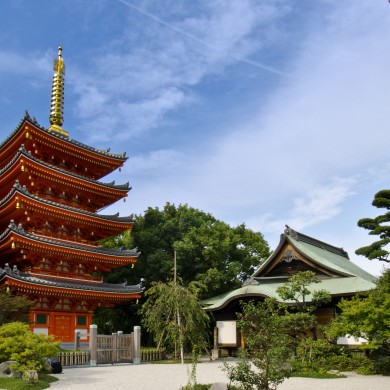 This head temple of Shingon Buddhism Kyushu sect is given the special name Nangakuzan. It is dedicated to a famous monk called Kobo-Daishi (Kukai). According to tradition, Kobo-daishi set up this temple when he came back from China and prayed for the eastward dissemination of Tantric Buddhism. This… Rinzai sect of Zen Buddhism and its Sango (temple’s title) is Ankokuzan. The shrine was constructed by priest Eisai, and its first chief priest was Minamoto no Yoritomo. The ground was originally Hyakudo hall owned by Sohito who lived in Hakata. The words “扶桑最初禅窟(The First Zen Temple)” on the… This is the temple of Rinzai school Daitokuji sect Buddhism and is also referred to by the name of Sekijozan. It is located at the end of the narrow alley, which runs from north to south in the east of Tochoji Temple. Getsudo Soki, who was the fellow disciple of the priest Daio Kokushi, founded the… Filming at rows of cherry trees in Tenjin Chuo(Central) Park

At Tenjin Chuo Park located in the center of Tenjin, the scene where Hae-hyo and Je-moon making a bet using small change was shot.

This park is a popular spot where cherry blossoms can be enjoyed in the middle of the city. The adjoining ACROS Fukuoka has the outer wall of the building like a forest, and you can climb up to the top in the green during the day. This is a park of 31,000 square meters with trees and grass, located in the middle of Tenjin. While in the city, it is the perfect place to relax. Exhibits and events are held in the spring and fall. ACROS Fukuoka is a terraced structure building facing Tenjin Central Park. This urban oasis is a junction of international and cultural information. There are various facilities on each of 15 floors (including 2 underground floors) in this building; music concert hall, convention hall, municipal …

This time, the handmade map made by the staffs of Fukuoka Film Commission is also posted!

★A favor from the staffs of Fukuoka Film Commission★
The shops that appeared in this movie are rooted in the area, and are quietly open.
When you visit these shops, please enjoy a relaxing time without breaking the usual atmosphere.
Furthermore, please note that some locations might not be accessible. So, how was the tour to filming locations of the movie “Fukuoka”?

Despite the fact the campaign in Korea, which was planned in March 2020, was postponed, be sure to visit the filming locations, as very popular areas of Fukuoka City were included in the movie.